Take Me Out To The Ball Game

Matt's birthday is actually in a few weeks, but with Jefferson's fast approaching arrival we were running out of time to travel before I am too far along to safely do so. 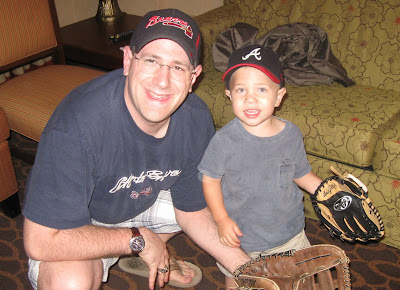 This is a big birthday for my amazing husband...he will be 30! To me that is a very special birthday and I wanted to do something really special to celebrate. If you know Matt, you know he is a huge Braves fan, but he has never been able to get to a Braves game. 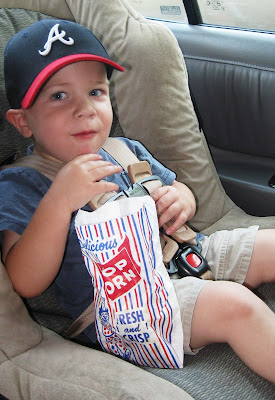 So we loaded up and headed for a weekend away in Braves country! My boys had a blast! This is their Disney World, their dream vacation, the best thing that could have happened to them. Harrison was as excited as Matt! 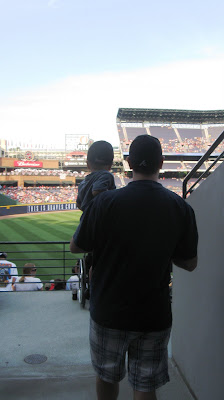 These two men breathe baseball. They play catch and have batting practice every night. Harrison is learning the Braves players names and the Braves war cry. He knows how to slide into home plate and how to "get someone out!" 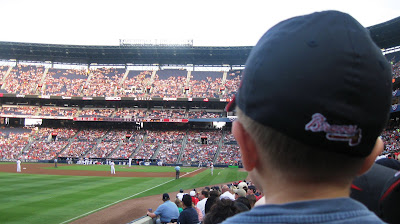 When Harrison knew we were headed to a real baseball game he was ready to jump on the field and play alongside the players. He didn't understand why he couldn't join in the game. He kept yelling at one of the players named Prada to, "Throw the ball to me Prada! I catch it!" 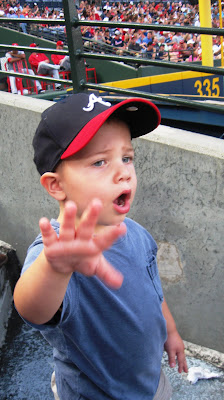 Harrison really got into the game. This is when he was yelling to, "Get him out!" He had a blast cheering along with the thousands of fans, chanting the war cry, and watching the fireworks go off after a home run. 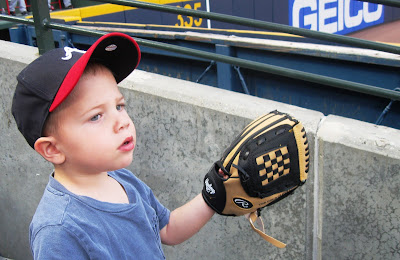 He kept his glove close by during the entire 12 innings (yes, our first "real" base ball game ended up going into extra innings-what more could two baseball fanatics ask for?) 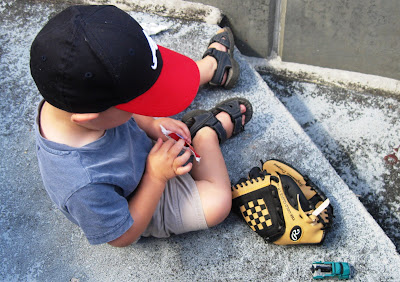 My little man was so great during the game. A few slower times during the game Harrison would sit on the steps and play with his cars, chow down on cotton candy, or a help his Daddy eat a foot-long hot dog! 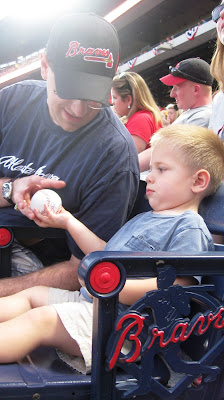 My two men had such a blast and we couldn't have asked for a better evening. Harrison was still going strong when the Braves pulled off an amazing win close to 11pm! Maybe it was the adrenalin, but Harrison was pumped. These guys had such a blast that we decided to go to another game the next day! 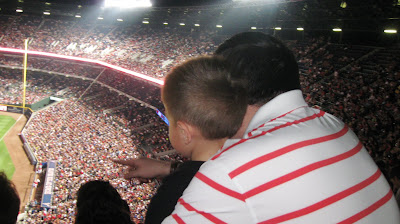 This time we sat up high behind home plate so the boys could watch the action from different view point. I though the boys enjoyed themselves the first night, but I think that just wet their appetites. They are hooked and I admit, I had a great time too! 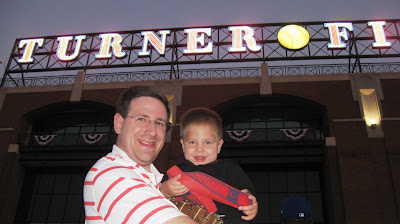 I love the bond my two men have. I love their shared love of sports and cheering on their team. I love watching them get into the game together as they commiserate a loss and cheer a win. I love that Matt had an amazing birthday weekend celebrating with his little guy and their beloved Braves. I love that I get to have a house full of men and I can't wait until Jefferson is here to join in on all the fun!
Labels: Harrison Matt Sports