Matt has introduced Harrison to C.S. Lewis's world of Narnia. Harrison is enthralled by the stories of fawns, beavers, sword fights, and most of all...Aslan. 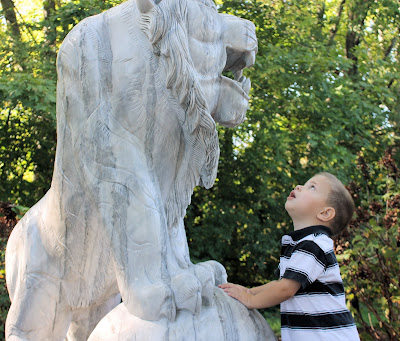 Through the eyes of our child we have seen the way C.S. Lewis wanted his reader to feel about Aslan. Harrison has a respect, an awe, a fear of Aslan born from Aslan's power, his authority, and his un-tameness. 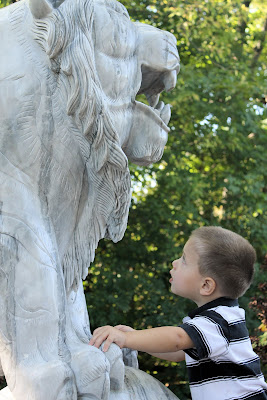 Harrison saw this stone statue of a lion and approached very cautiously, circling, and timidly peeking up at his face. He told me it was Aslan. He lovingly stroked its paws and then grew very sad thinking Aslan had been turned to stone. I assured him it was just a statue and was not once Aslan or any other lion for that matter. 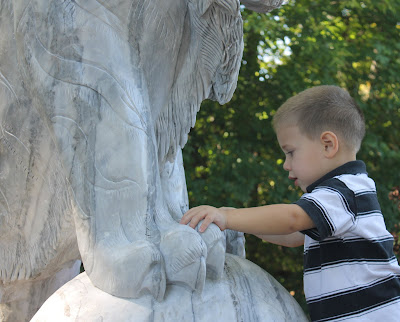 Harrison even tried breathing on it to turn it back real! He came to the conclusion that only Aslan can do that. It made me excited to think ahead to when Harrison will realize the comparison of Aslan to that of God and his amazing, awing, presence He has. 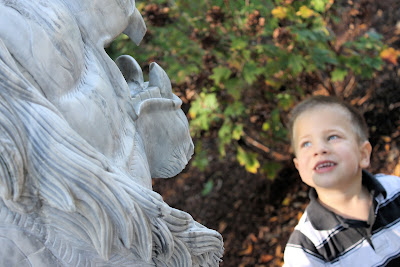 Harrison's fearful, respectful, and loving approach to the character C.S. Lewis wrote made me wonder about how I approach Christ. I think Harrison got it right. All too often I take for granted my presence in front of the King of Kings. Sometimes I approach too casually, too hurriedly as if I'm fitting Him in my busy day, or forget to all together. We only have the honor of being in His presence because of the sacrifice He made for us. Have you remembered that as you approach the King of Kings?
Labels: Hide it in Your Heart parenting