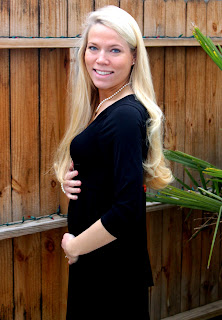 How Far Along: 23 weeks
Size of Baby: Between 11-12 inches and just over 1lb, about the size of an eggplant
Gender: Boy! Wilson Tyler!
Weight Gain: Around 5lbs, but I go the doctor tomorrow and with Christmas candy and baking I'm sure that number has grown! :)
Maternity Clothes: Not yet, but at the end of the day Wilson protests a ton at the snugness of my jean's waistband. I told Matt I feel like I just gorged myself on a feast by the end of the day with everything so uncomfortable in there, so I'm thinking the idea of stretchy, comfy maternity clothes may start sounding good soon.
Movement: Wilson's kicks are getting stronger and more pronounced. He is very active right after I work out, anytime he hears the boys going wild and hyper, and at night right as I start to drift off to sleep :)
Cravings: This week we have been hit with a stomach bug. So between cleaning puke clothes, blowouts, dirty sheets, and disinfecting, my appetite has hit the hills. Hopefully the germs are gone and we can get some little boys well!
Symptoms: None really, just the over-full stomach feel at the end of the day and Wilson's tumbles and kicks:)
Best Moment of the Week: Two of them actually- First: Harrison was curled up and had his head in my lap. Wilson started kicking at the back of his head. At first Harrison looked up at me funny and I asked him if he felt something and he said, "Something funny in my head!" I told him it was Wilson kicking at him and he sat up straight staring wide eyed at my tummy, smiled, then laid back down to get Wilson to kick him again. :)
The Second: When we ask Jeff where Wilson is he just started last night pointing to my tummy saying, "Wils" and then kisses right on my belly button. But clearly he's a bit confused because we asked him later where Wilson was and he pointed to his own tummy and exclaimed, "Wils!"
Labels: Pregnancy