My little man absolutely loves to help in the kitchen. He is so excited to help measure ingredients and use, "Mommy's toys" aka, the mixer, blender, etc. 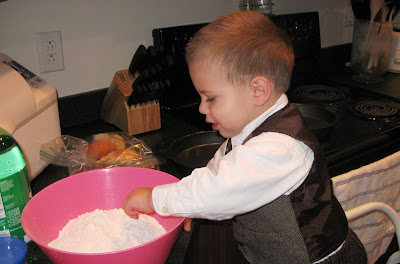 So when I asked if he wanted to help make his cake, Harrison was all over that project! He was ready to get started the second we walked in the door from church as evidenced by his attire - which being the observant mom I am did not think about changing until after he was covered with red food coloring. Oh well, nothing a little bleach didn't fix :) 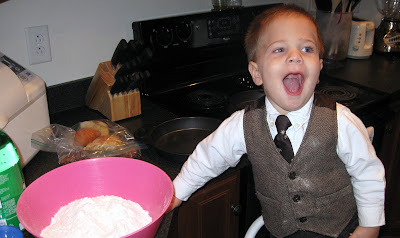 Harrison's favorite part of cooking is my long standing rule of being able to taste as you go. It's only right that the chef sample everything, just to make sure it's ok. 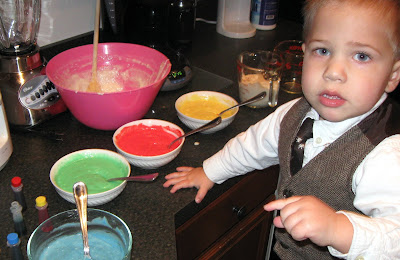 So Harrison's little fingers plunged into flour, cake batter, and icing. Most of the time it didn't stop at his fingers. He was caught up to his elbows in the blue batter later on :) But what is a birthday without having the time of your life, and clearly covered in cake batter was giving Harrison the time of his two-year-old life! 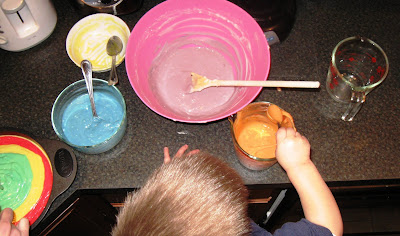 I had found this great sounding recipe for a tie-dye cake where you pour several different colors in each pan. I thought it was easy enough and that Harrison would love all the bright colors.

Well, I was right! Harrison loved the colors and it sure did look really neat...before baking :/ 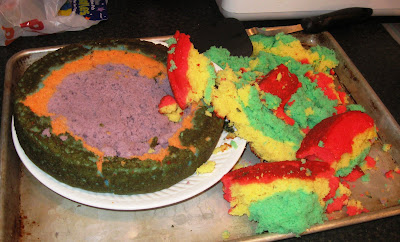 For some reason, after removing from the pans, the cakes just literally fell apart before our eyes. No way I could decorate that mess. Of course Harrison dove right in with both fists and had a blast devouring the "broken cake." 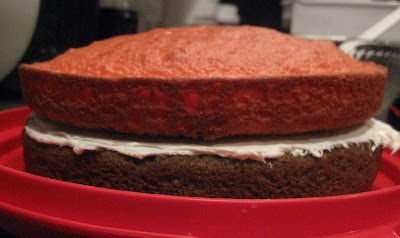 So after a quick run to the store to pick up another round of ingredients, I scratched the tie-dye cake and went for a bright red layer and blue layer. Harrison had requested an "orange cake". I have no idea what he meant, but I figured a healthy layer of bright orange frosting would do the trick and his orange cake became a... 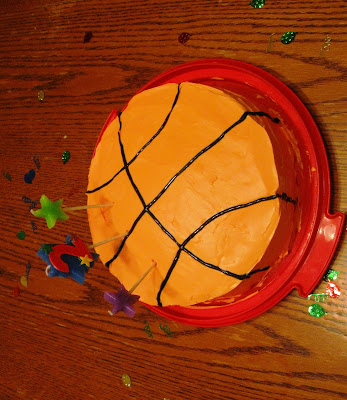 ...Basketball! (For some reason the picture keeps downloading sideways and I cannot get it to turn.) Since we are in the throws of March Madness, Harrison has seen a lot of basketball games and was thrilled to have his own basketball cake! 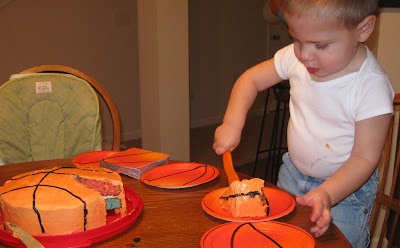 I think it was a big hit. And don't worry, this time I made sure his nice clothes were off before he dove in!
Labels: Harrison Holidays