If You Give A Harrison Your Attention...

...you're going to need to get a chair, because you aren't going anywhere for awhile. At least that's what a tourist, a Secret Service Agent, and a Senator all learned at the White House yesterday. 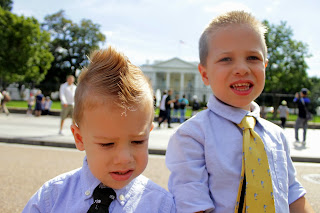 The Tourist: During the prayer vigil for Pastor Saeed the boys started getting a little too rowdy to keep them close to the guest speakers and cameras so I moved them away towards the White House where a very nice lady offered to take our picture. I guess she assumed we were tourists, but I told her sure! 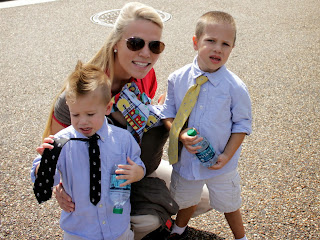 It's didn't take but a second to notice that this nice tourist only had one arm and was using her chin to cradle my camera. As you can tell by Harrison's face in this picture she snapped, his mind was reeling with questions that only took 0.2 seconds to stream out vocally. "You only have one arm! How is that!?" "Shh," she said, "It will be our secret." To which Harrison responded, "I bet a shark ate it!" 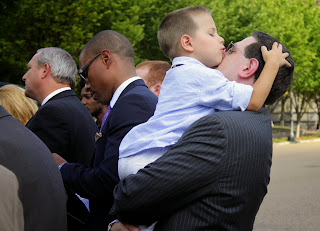 Then there was the Secret Service Unit stationed around the perimeter of the prayer vigil. Side note, kinda neat they were there protecting our rights to be praying in front of the nation's White House. But of course Harrison needed to go say hi and befriend more of DC's finest. A long conversation ensued about where he lived, grew up, and the gun in his holster. 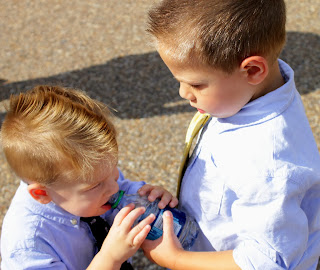 And then he asked Harrison the golden question, "What do you want to be when you grow up?" And always ready with an answer Harrison began, "Well, I want to be a police man and catch bad guys. But I've been praying about it because I need to do what God wants me to do. And I'm thinking God wants me to be a ninja." 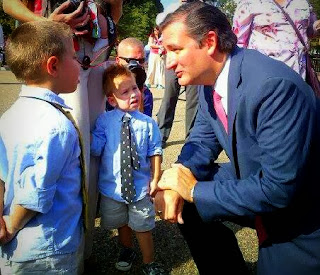 And then we met Senator Cruz, an incredible man who took time from his busy schedule to stop and crouch down to talk to the boys one on one. Completely ignoring staffers and cameras he asked their names and ages. Both boys politely answered his questions, except Harrison decided to change the facts. "When do you turn five?" The Senator asked. "In September!" "Why that's now! So it's your birthday soon?!" Harrison shook his head excitedly and I wondered if he thought he was going to be thrown and impromtu party by the Senate right there in front of the White House. I stepped in with the correct information to which Harrison reluctantly agreed before moving on to questions about Senator Cruz's kids and their ages.
Who knows, maybe Harrison will be a Senator on one knee talking to other kids one day, but for right now, I'm pretty sure he could go toe to toe with Senator Cruz's 21 hour speech marathon. If you give him your attention, he just may!
Labels: Harrison Political Washington D.C.