You know those Pinterest fails...the ones where you see the perfect example of the pin to achieve and then someone's tried-at-home followup with the sarcastic "nailed it" typed across the bottom of the ultra fail. 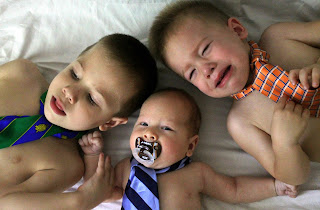 This is my Pinterest fail...it bombed, imploded, went down in flames. The dreamy photo of the sleeping newborn wearing his Daddy's necktie. What a great idea for a Father's Day present, I thought...that would be easy to accomplish, I thought...I could snap a few frames and prob get a decent shot, I thought... 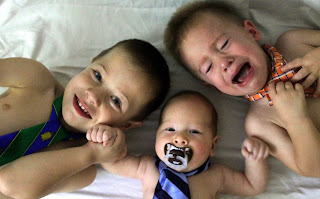 I thought wrong. Let me just cover a few basics I didn't take into consideration. First, uncooperative weather forced an indoor photo shoot and throwing a sheet over the back of a bookcase for a backdrop wasn't cutting it, but it's all I had with my short time frame. 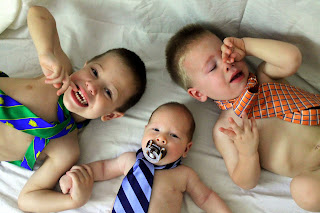 Secondly, in order to take cute pictures of boys wearing their Daddy's ties, one should probably know how to tie a tie. Guess what...I don't. Being an all boy mom I should probably learn this skill sooner than later but in the meantime my poor sons look like a British boy band in their silk scarves. 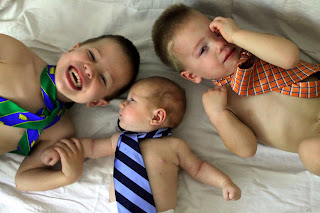 Third, with three crazy boys you're doing pretty good to get at least 2 of them happy in any picture so I was a bit presumptuous assuming I'd get three happy faces to frame. But of course it didn't help that Jefferson had a jar candle fall on his head during the session and even with hugs, kisses, and candy bribes decided he would continue the theatrics to be preserved in the photos for all times sake. 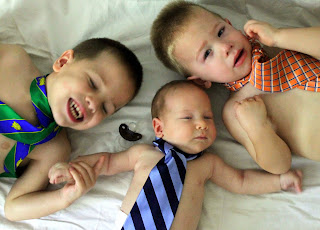 And then you've got the desired accessories to throw off the cute original idea. I had to wrestle away a shotgun and a football helmet from Harrison, boots and a belt from Jefferson, and Wils won with his paci so I wouldn't have 2 in tears. 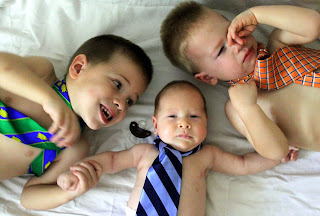 The whole fiasco taught me many invaluable lessons...
1. Learn to tie a tie
2. Three kids in a picture means it takes 3 times as long to achieve a decent shot
3. The kids in the Pinterest pictures aren't real
4. My boys have the best Dad and the non-photographic rascals are super blessed to have him as an example of a superhero, a husband, and a father. Happy Father's Day!
Labels: Brothers Holidays