We were very blessed to spend some time with my uncle and cousins who are all accomplished military officers. When Harrison found out we were going to a "real army man's house" he was so excited he could hardly sleep the night before. 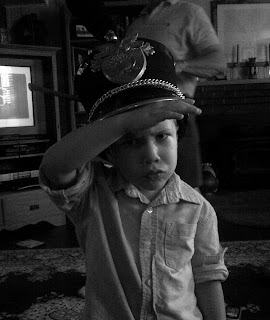 Harrison was starstruck upon meeting "the real army man" who he renamed "America Man". His admiration was evident as my uncle presented his sabre for Harrison to hold for a few minutes. It was as if he was cradling a newborn as he gently inspected the weapon. 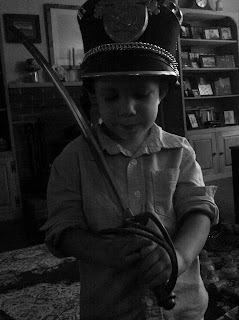 Pride swelled through his entire frame as he shouldered the blade and stood at attention. True to Harrison fashion he had dozens of questions and soon learned how old he needed to be, where he needed to go, and how he needed to preform to one day own his own sabre and military rank. 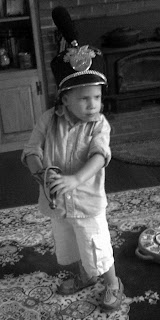 As if Harrison's day could get any better, my uncle placed a military helmet on Harrison's head and saluted him when we left. I'm not exaggerating to say the helmet has not left his head nor has his talking non-stop about meeting his "Uncle America Man". Harrison has lined up his course load at West Point, has requested us to refer to him as "Captain", and is counting down the days until he is 18, graduates high school, and can go to "army man school."
Labels: Harrison Political