I'd say this guy had a pretty good birthday. It's really the first year he has been old enough to anticipate, plan, and appreciate all that makes a birthday. 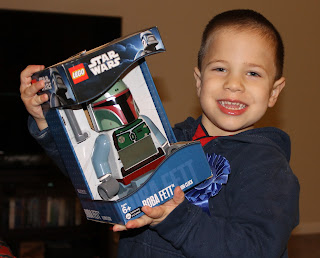 And this little hands-on man helped with every detail of his celebrations. He was pretty specific about the "special birthday things" he wanted. His actual birthday was on a Thursday so we started the day off with sprinkle pancakes. 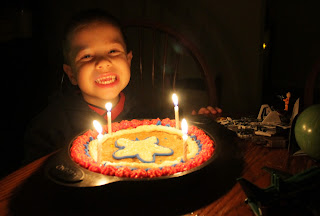 Then we braved the blustery day and went for a picnic at a nearby park. That night we had his requested menu of "man meat" (aka grilled beef of any kind), bread with olive oil, and a giant cookie cake that looked like Captain America's shield. 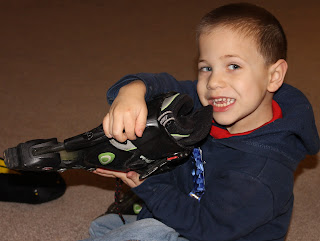 Then we opened his presents from us. Harrison is the best present recipient ever as he "ooohs" and "ahhhs" and gives heartfelt "thank yous" for every little thing. He couldn't have been more grateful for his "Bunny Hunter" LEGO clock and roller blades. 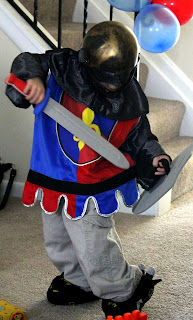 Then it was family party time! This was the first time we have ever been able to host a birthday party in our home with all the grandparents and not a moment went by that we weren't feeling so blessed to be able to have our families in our home all together. 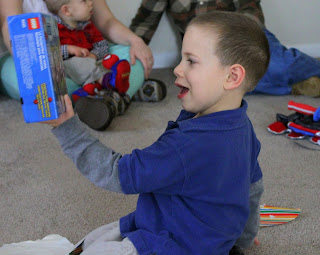 After indulging in the requested lunch of pancakes, sausage, bacon, messy chips (Doritos), energies (M&M's), and olives, Harrison continued his amazing gift receiving skills as he opened rifles and LEGO's, cannons and robot bugs. I don't think there has ever been a happier four year old. 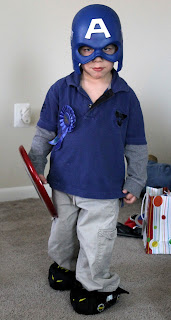 The requested theme of the day was Transformers. So with Optimus Prime banners and Megatron cupcakes, Harrison loudly joined in singing "Happy Birthday"! To say he had a great birthday would be an understatement. 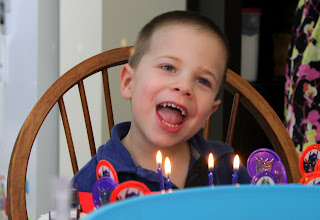 The guy is still running on a party high. He is loving being four, looking at pictures from his party, and playing with his new gifts. Later that night he asked when his next birthday was. "365 days bud. You got a whole year to go." "Ok, well I have an idea!" He exclaimed, "Let's make a paper chain 'til my next birthday so I can see it coming faster!"
Labels: Harrison Holidays