A Profile of the Brothers 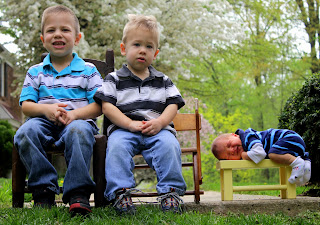 Harrison: Our God given firstborn. He is a natural leader, take charge kind of guy. He has a fierce protectiveness for his mommy and brothers. He would rather direct than create, play outside than stay indoors, and wrestle instead of read. He hates hearing Wilson cry and becomes Mr. Fix-It to solve what may be causing the fussing. He is the right hand man of the house and takes his oldest brother role seriously by conducting daily sword fighting or football throwing lessons for both his brothers. 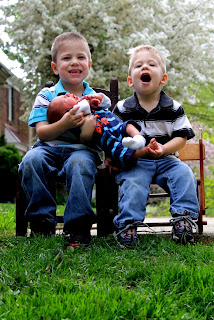 Jefferson is our quiet observer, intelligent, and more shy than his bigger outgoing brother. He notices every little detail of every situation. His sensitive little heart breaks when his baby brother, Wils, is fussing. He loves to read and color, create and compile. He is a creator, an instigator, and knows everyone of his brother's buttons to push. He does not give up easily, loves a challenge, and loves a good wrestling match. He loves to follow right instep with his big brother, but has not passed up an opportunity to dote on his baby brother. 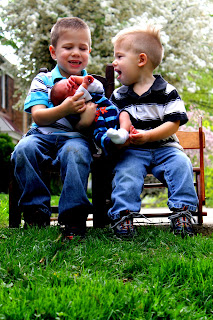 Wilson is our feisty new little man. He is a very successful communicator and knows how to get his opinion across. He knows the voice of each of his wild and crazy family and has a 100% track record of stopping any fussing the second he is one of his big brothers' arms. This always perplexes me since the positions his brothers have him twisted through limbs and open palms providing zero secure feelings but must be relaxing to him. 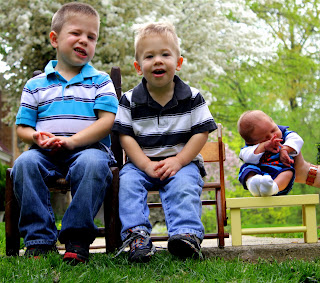 And my boys, my three sons, the brothers, are all together a team of testosterone, bottomless pit tummies, and competitive drive. They are strong and brave, sword wielding and outgoing. They are men in training, future leaders, husbands, fathers, and heroes. Even at four years, 20 months, and 4 days they are already some of my heroes and I couldn't be more proud. 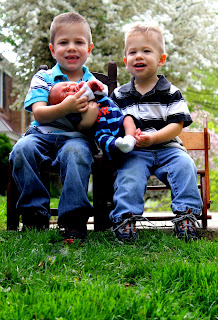 I could never put in words how much I love these three little men God has granted me the blessing to be a mother to. I love every minute of fruit snacking, wild wrestling, non-stop competing, cheeze-it devouring, flowers for momma's hair picking, never to big for a hug from mom needing moment. I am three times blessed and in love with three perfect little men.
Labels: Brothers parenting