The Old man and the Feet

Wal-mart is nowhere people usually desire to be; not a first choice of ways to spend a sunny summer day especially. It is not clean, quick, or convenient. It is not fun with a baby. I can always count on running late, Wal-mart running out of something I need, or someone running their cart into mine. It is full of people; many different kinds of people. And I am sad to say, for the most part I ignore most of these people I pass, as you do pass hundreds in a single Wal-mart trip. They are nameless faces I squeeze around trying to get the objects I need as quickly as possible. Harrison is the only person I concentrate on as I make the Wal-mart experience as painless as possible for us both.
That all changed at this Wal-mart trip...
One man changed that- Richard. 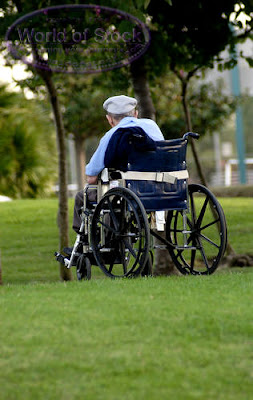 He had no intent to let me hurry for he was in no hurry. In fact, Richard was in a wheelchair. Richard had to be in his 80's. His voice was soft, his hands were worn, and he was being ignored by a hundred people pushing past him. I decided to slow down to let him pass at one of those intersections in Wal-mart that could rival Times Square. He smiled his thanks and said, "No, babies have the right-of-way." I smiled back and began to move forward as Richard spoke again, "My payment for kindness is that I get to see that baby." I had to smile at that! Of course who wouldn't want to see Harrison! I began to babble on about my baby and this and that, but Richard had no intent for small talk with me, he wanted to converse with Harrison.

"Hello, young man, my name is Richard-that's what I prefer though most people call me Dick.
So your name is Harrison? You are one strong boy! You will be a man one day, with a name like Harrison you will be a strong man!"
"You look so happy, stay that way..."
"You look so healthy, stay that way...you mom sure does love you to keep you looking so happy and healthy, always recognize the things she does for you."
"Can I see your feet Harrison?"
His worn and wrinkled finger stroked along Harrison soft little toes and perfect unblistered soles.
"These feet are miracles Harrison, they are the tiniest miracles."
Richard starts to get teary.
"I had two boys Harrison- their feet were this small, they grew into men and those feet took them all over the world. You get to decided where your feet take you. Make those decisions for the better Harrison. Be wise."
"Love your mama Harrison and be blessed."
He didn't say another word as he rolled away. He didn't make idle chatter; he didn't hardly talk to me. In the middle of a chaotic superstore two men had held a conversation...
One at the end of his life, the other at the very beginning.
A baton was passed from the wise to the learning. These two men, so different-
one wrinkled, one smooth-
one worn, one new-
one hunched, one growing-
one crippled, one stretching young legs-
one experienced, one learning...
Harrison had sat mesmerized by Richard. Their eyes locked on each others for that time. Harrison had been given a charge, a challenge. His feet are to take him places, and the wisdom of Richard's age knew the directions they could go are vast. 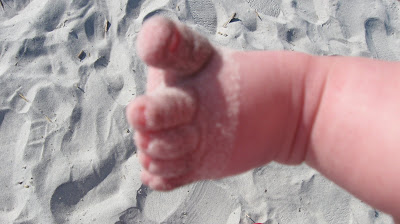 Harrison, I don't want you to forget Richard or his challenge. May you walk in the Lord's footsteps.
"Thy Word is a lamp unto my feet and light unto my path." Psalm 119:105 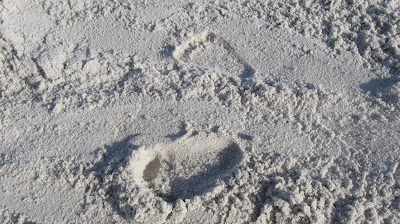 Labels: Harrison Hide it in Your Heart Megan parenting