As much as we wanted the house full of grandparents, aunts, uncles, and cousins to celebrate Jefferson's birthday, we knew it was just going to be the four of us and that we would have a special time of happy birthday partying. 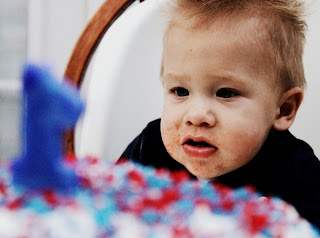 Matt reasoned that a first birthday is really the only one a parent gets to decide the theme. After that kids start having some input. So he decided to go red, white, and blue for Jeff's first party. 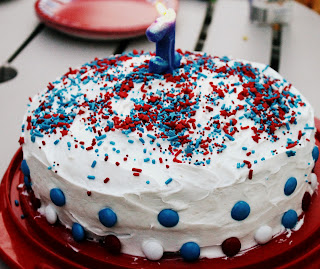 Knowing most of this cake was going to be obliterated in a matter of minutes we kept it simple but enticing enough that we kept seeing missing M&M's and finger swipes. Big brother claimed he was just testing it. 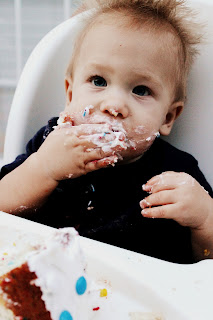 Jeff was more mesmerized by the candle than the singing or the cake, but once he had a slice in front of him nothing else mattered. You would have thought he hadn't eaten in days the way he attacked it! 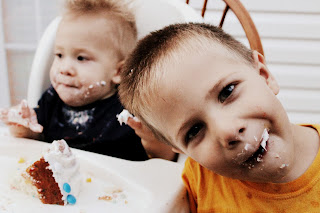 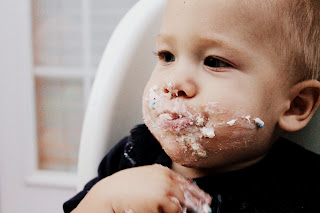 Jefferson's seriously went to work to diligently remove all traces of sprinkles, M&M's, and icing. I'm not sure if he had reached sugar overload at this point or just didn't like cake, but he declared his sticky self all done. 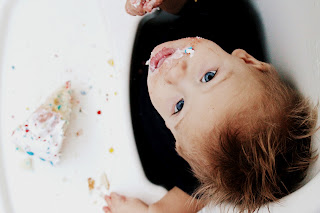 Afterwards we realized more benefits to summertime birthdays...we hosed the birthday boy down outside before presents. Clean-up with boys is so much easier with a hose, plus they just think it's play time. Win! Overall, I think our icing covered one-year-old had a blast and we look forward to continue to get to know this little man God has blessed us with!
Labels: Holidays Jefferson