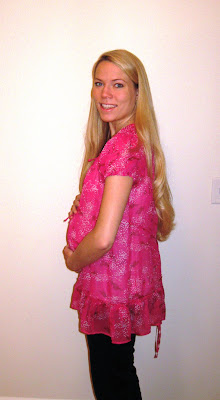 Pregnancy Highlights
***UPDATE***
At the doctor yesterday we found out I am 2cm dilated and 60% effaced. As she pointed out, women can go for weeks like this, but she said better to play it safe and plan for an early arrival!
How Far Along: 35 Weeks
Size of Baby: 19-20 inches and about 5 1/2lbs. Harrison was only 18" and 7lbs at birth so I have no idea really how big Jefferson is now, these are just averages. Most babies have reached their length at this point and are just busy building up their cute baby rolls.
Weight Gain/Loss: (UPDATE) Jefferson and I did grow in the last few weeks! We gained three pounds for a grand total of 15lbs so far! Last time I went to the doctor it was 12lbs, but I go again tomorrow so we will see how that has changed! I feel like this little guy has grown a ton and that there is not much more space in there!
Gender: Boy - Jefferson Lee
Movement: He is rolling and stretching still. I think he has dropped as his feet don't reach my ribs anymore. I feel most of his movements lower in my tummy. He is still extremely active late at night and right after I work out.
Maternity Clothes: Still a mix of tops and dresses, and maternity shorts and capris
Cravings: Still lacking an appetite, nothing sounds good and I don't really get hungry, but late at night, I still want a huge mug of sherbet ice cream...maybe that's what makes him so hyper so late? :)
Symptoms: Like I said, he has definitely dropped and I'm feeling more pressure lower. Nesting reached an all time high this week as I scrubbed the kitchen trashcan, disinfected all toys, and made a bazillion lists of things I still need to get!
Best Moment of The Week: Getting to hear his strong little heartbeat every week now is quickly becoming a favorite! I am really getting excited about meeting our little guy! 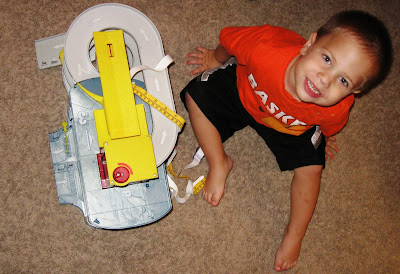 Big brother Harrison with his beloved car ramp which is 19" long, about the length of Jefferson this week.
Labels: Baby Pregnancy