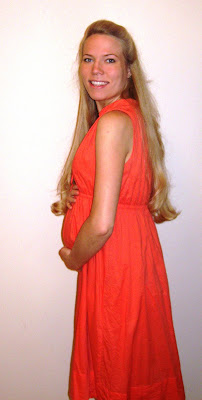 Pregnancy Highlights
How Far Along: 33 Weeks
Size of Baby: Just under 18 inches and weighs around 5lbs (Hard to believe I have the equivalents of a bag of sugar in there!)
Weight Gain/Loss: 12 lbs still, but with this little guy putting on a half pound to 1 pound every week we should be growing fast. We'll find out at our appointment next week!
Gender: Boy - Jefferson Lee
Movement: There are definite things that make this guy squirm: his Daddy's voice, Harrison's voice, putting a cold cup of ice cream on my tummy, and music. I think he is nice and squished in there because he has continued with the rolling and stretching. He seems to favor his feet in my ribs :)
Maternity Clothes: Still a mix of tops, and dresses, and maternity shorts and capris
Cravings: Like last week, still don't have a huge appetite, but I find time for my daily bowl of sherbet, even if it is midnight!
Symptoms: Still having that round ligament pain after running, but a friend recommended a maternity belt which helps a lot during running. I just need to remember to put it back on for a few hours after I run because the discomfort comes back in full force reminding me very unkindly of the miles I put in.
Best Moment of The Week: Harrison crawled up beside me with his trains, lifted up my shirt and drove them across my belly. He said he was playing them with Jefferson! Too cute! 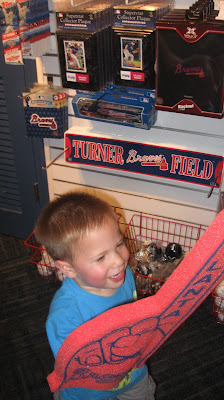 Big brother and his #1 Braves fan finger, about the size of Jefferson this week.
Labels: Baby Pregnancy