So we were taking a walk today when all of a sudden we were attacked by Indians! Well, actually it was two little boys with makeshift bows and arrows. That bold little kid raised his bow and took aim at my defenseless little guy in his stroller! And to accentuate his intentions made some sound effect, as only boys do, of the arrow leaving his bow and arching towards my innocent, wide eyed baby! Ok, you asked for it kid! He got my scowliest momma look I could muster - I mean I don't know him, so I couldn't fuss at him, and he didn't shoot a real arrow, but he was messing with the wrong boy! 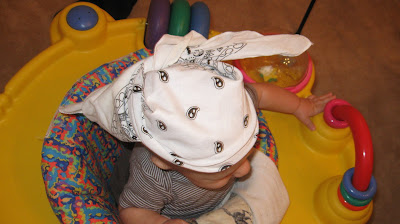 My little guy is a tough man in the training! You better watch out little bow and arrow kid! My guy is going to get bigger. He won't need his momma to scowl at you because he'll have his own arsenal! That's right, he will be well trained in not only makeshift bows and arrows, but light sabers, magnolia bloom grenades, and super soakers! 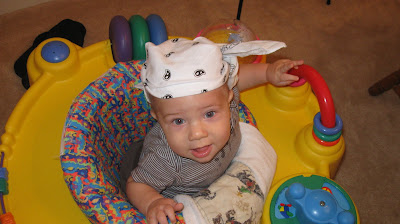 You may think you have spied an easy catch because he is just a baby now, but watch out! This is a man in the making! He will be bigger, much bigger. He will know your intentions, not just be wide eyed at your war cries; he will be able to defend his territory and you little bow and arrow kid better watch out mister!
Labels: Harrison