We took our not so little man to his 6 week check up this week, or as Harrison said, "We took Wils to the doctor to get shot." (aka, vaccines:) By the way, Harrison and Jefferson are not fans of the whole shot thing. Probably shouldn't have let them witness that part. 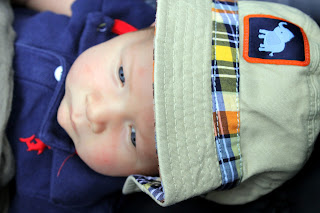 You would think that fact that Wils is in size 2 diapers, or six month clothing may have clued me in as to his large size, but no. It wasn't until the receptionist at the front desk questioned my type of appointment wondering if I meant the 4 month one. Pretty sure he's just 6 weeks. 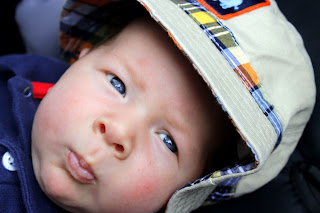 So when my smiling, rolling over (back to side/front), "talking", head holding, reaching and grabbing 6 week old topped the scales at almost 12lbs and measured 22 inches the doctor labeled the guy long and large. My handsome not-so-little man is also sleeping 6-7 hour stretches at night, knows how to sleep and eat on the fly, and is super laid back to just go with the flow. 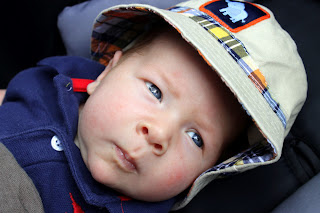 Thoroughly impressed with his ability to interact, bear weight on his legs, attempt to reach for things, and smiling at his brothers' antics the doctor was convinced the guy was going on 6 months. I would at least agree the boy eats as much as a six month old! 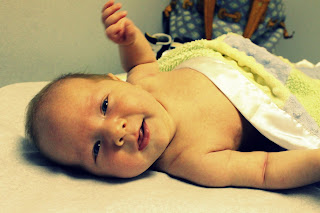 This handsome man has captured all of our hearts in the few weeks he has been here. These past six weeks have been so rich and blessing filled as we get to know our youngest son and brother. Wils, we are so thankful for you and look forward to each day with you as you grow into the man God has created you to be! We love you with all our hearts!
Labels: Wilson