Jefferson is the most gentle, calm, easy going kid in existence. He is my polite little gentleman and has earned the very appropriate nickname of Cap (Captain America).
He is a peacemaker and calm defender. He doesn't get into the serious brawling his brothers engage in and he doesn't have dreams of tackle football. 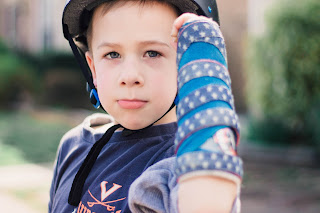 In fact, he wants to be a doctor when he grows up. His easy going nature has a way of calming and he is an incredible listener so I know that if he does indeed earn his M.D. he will be the best there is. 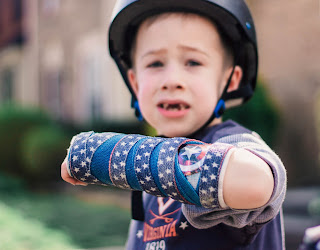 Due to his gentle, passive nature he was the last of the boys I expected to break a bone. But none the less, he secured the role of first to have a broken bone in our family. He had two back to back falls a day apart so we aren't sure which one actually caused the break. But since the first fall he had been complaining of pain and after the second fall his arm couldn't be touched without him turning white. 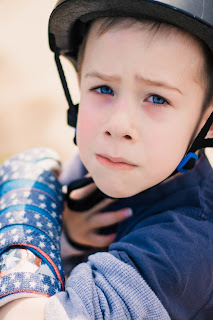 So armed with a bag of pretzels and an iPad, I loaded up all five kids and took him to a local urgent care. After being x-rayed the doctor there said he had major damage to his growth plate and I needed to get him in with an orthopedic surgeon ASAP. Terrified I immediately called and we got seen the next day where he was cleared of growth plate injuries but did have a break that needed casted. 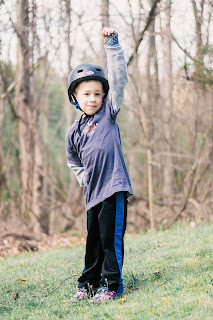 We were blessed with an awesome tech who took one look at Jefferson's Captain America action figure he had clutched in his hand and created him his own arm shield. Jeff has been very proud of his Captain America protective gear for the past three weeks. We had it taken off last week and he's still in a hard brace for a few more weeks, but his arm is healing great. I'm super proud of my gentle little man and glad that for a few weeks he got a built in weapon and shield to make him feel even more like the Captain America I know he is.
Labels: Jefferson