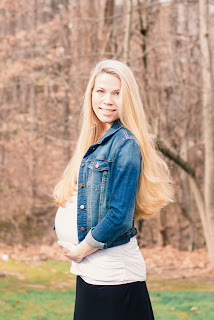 How Far Along: 36 Weeks
Size of Baby: Big! Actually he probably isn't much bigger than 6- 6 1/2 lbs at this point but he feels huge in there!
Gender: BOY!
Maternity Clothes: In this picture I am wearing my very first maternity top. Also, it's not technically maternity clothes, but I've gotten to the point where I raid Matt's t-shirt drawer for something comfy to sleep in haha!
Movement: His movements are definitely changing in nature as he becomes more squished in there. He still makes some powerful movements but they aren't all over the place and as drastic.
Cravings: No cravings right now, but I'm looking forward to little things like being able to lick the brownie again!
Symptoms: Braxton hicks are picking up even more in frequency and intensity. I'm also waking up every few hours all night which my mom always told us was God's way of training us to need less sleep in just a few weeks ;)
Best Moment of the Week: Last weekend we decided to just go out for lunch, something we very rarely do, and celebrate our family of six becoming seven! It's been such a blessing from day one to have all the kids so incredibly excited about their newest brother and his arrival. From Madison's constant kisses on my belly, to Wilson asking if he can hold him yet, to Jefferson and Harrison asking if he's coming every day, it's been so sweet to see their excitement!