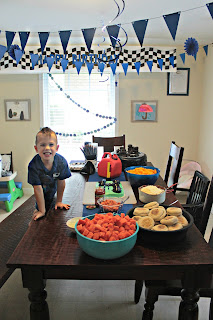 I can see his stress building as he pressures himself to make the perfect decision, so he'll procrastinate making any just to avoid it. 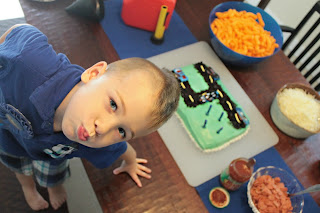 This means choosing a shirt to wear in the morning can escalate to life or death status in his eyes. 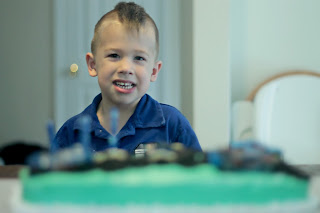 So choosing a birthday party theme included months of wavering as we scratched dozens of ideas off the list. Jefferson maintained his methodical approach of waiting for the perfect choice to come along. 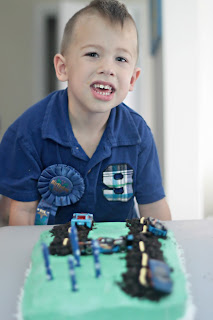 Out of the blue the perfect idea came to him and since he only makes a decision once he is certain, "blue racecars" became the theme to my four year old birthday boy. 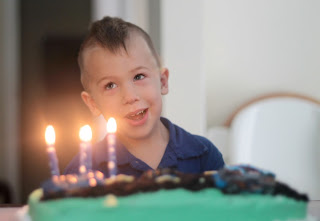 I honestly don't know where the idea for "blue race cars" came from since we don't watch NASCAR or any kind of vehicle racing for that matter. But he was resolute and I set out to give him the best "blue race care" party ever. 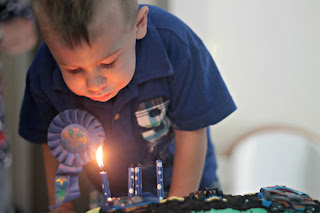 He had a blast choosing blue cars for his cake, watching the blue flags being hung across the table, and running under the "finish line" banner his aunt made for him. That night he threw his sweet little arms around my neck and thanked us profusely for his "blue race car" party. 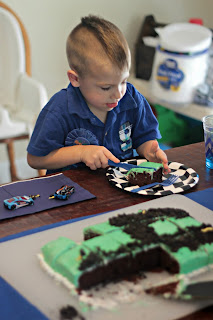 As a spontaneous, last minute, act before I think, type of personality, I have a lot to learn from my little man. I'm proud of the way he makes sure before he makes a decision. It's a character trait that can save him from many bad choices down the road and I love the wisdom he's already demonstrating in his decision making.
Happy "Blue Race Car" party J-Man! I love you!
Labels: Holidays Jefferson