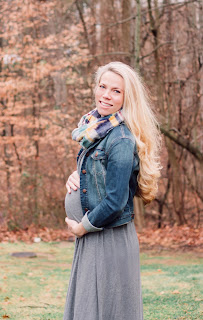 I haven't posted a weekly updated since like the second trimester. I'm now in my 6th trimester.
I kid, but seriously it feels about that long.
So let's play catch up and begin back at 35 weeks, even though that's a week behind, but I still want to document all that's happened...
How Far Along: 35 Weeks (at least in the picture)
Size of Baby: We got an ultrasound this week and they estimated he weighs 6lbs.
Gender: BOY!
Maternity Clothes: Believe it or not I still live in my Blanqi leggings and tank, but wear my regular tunic tops. Thank goodness for the current styles! I haven't worn one maternity top yet!
Movement: Little man is extremely active! He doesn't cooperate well for ultrasounds and monitoring since he won't ever stay still. But it's been a blessing because they want me to do frequent kick counts and I've never had to think about it too long before he's rocking and rolling in there.
Cravings: No cravings, no room to eat, and no appetite haha! But once he's born I'm sure my list will start growing of things I want to eat!
Symptoms: Braxton Hicks are starting to pick up a lot which is always an exciting sign of baby being here soon!
Best Moment of the Week: This week was a very full one! At my appt last week my blood pressure was elevated. They immediately ran tests and lab work and started throwing around words like "hospitalization, bed rest, and early inducement." Through much prayer all tests came back normal and blood pressure stabilized. We're not sure what happened there since I've never had blood pressure problems before but it was several days of learning to trust completely on God!
At my appointment this week we had another adventure. I had started experiencing itching along with some other minor symptoms. This began another whole gauntlet of testing and monitoring over several days. But we got to get an unexpected ultrasound to check on our guy and see how he could potentially handle an early delivery. Their measurements confirmed what I've been feeling for weeks! This guy is big; he was measuring 2- 2 1/2 weeks ahead! His lungs were practice breathing perfectly and he was looking around and sticking his tongue out and sucking his thumb. After another few days we were once again cleared after lab results came back but I think it's safe to say we're ready for an easy week with no adventures. It would already seem this boy is all about keeping us on our toes and making sure we know he may be the youngest but certainly not the quietest! :)