His Guess is as Good as Mine

Harrison, who has become quite the sports enthusiast, 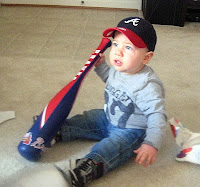 made his picks for March Madness, as did Megan and I. His bracket, like many others this year, is littered with red - the teams we all thought would succeed, yet have fallen short of their goal in Indianapolis. 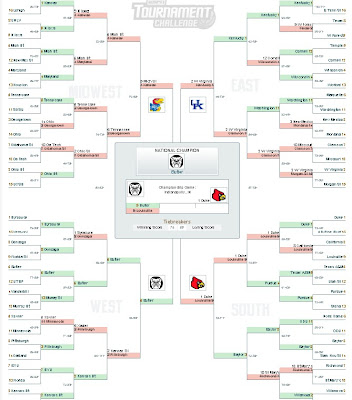 Like the rest of our Final Four picks this year, he was taken with the hype Kansas received - the dominance of the “rock chalk Jayhawk” (though for Harrison it may have been that he recently got some sidewalk chalk and likes birds) - and the up-and-coming Kentucky Wildcats (though again the fact that they are cats came into play).

Harrison let his heart get the better of him and picked his favorite mascots. Thus, his Final Four consists of two birds (Kansas Jayhawks and Louisville Cardinals), a cat (Kentucky Wildcats), and his favorite animal - a dog (Butler Bulldogs). 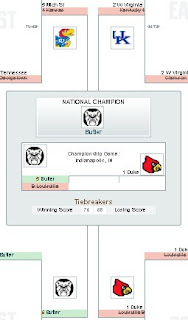 Like only a handful of the best prognosticators in the nation, Harrison correctly put Butler in the National Championship Game, and like fewer still, he has the Bulldogs winning it all. Though, he will be dreaming of birds, cats, and dogs long before tip-off time tonight. As I ponder his unique (though proving better than most) strategy, I would say, “his guess is as good as mine,” but it’s not. It’s better! So, in honor of Harrison, Megan and I will be rooting for the Bulldogs tonight - Go Butler!