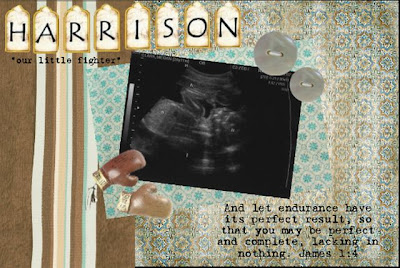 The past seven days have been full of tears, questions, hopes, and prayers. I started contracting last Thursday night and was in the doctor's office and hospital all last Friday. We were sent home on strict bed rest and medication to stop the contractions. After no real change over the weekend we were back at the birthing center early Wednesday morning and found ourselves being admitted to labor and delivery for preterm labor. I was contracting every 4 minutes but no cervical changes! That gave us an early start to fight this head on. I was placed on strong meds, IV's, antibiotics, and given a steroid to help mature Harrison's lungs in case he was delivered. While there we felt so many prayers and we felt held in the arms of God. Overall we had such a calm and the staff was incredible. What made it all though was our little man's fighting spirit! We heard several times from the nurses and doctors that Harrison is very strong and stubborn! We started noticing his strong nature while being admitted and hooked up to the fetal monitors. He gave more than two nurses a run for their money as he kicked and rolled into the monitors on my tummy protesting their tightness around his home. He kept messing up the readings! Then he would not stay still for the dopplar and lead the nurses on a wild goose chase as he made my tummy roll with his flips and kicks! After every contraction he would kick about as hard as I ever felt him. The doctor said they liked this little guy because most baby's get very stressed and overwhelmed during labor and their heart rates decrease with the work of contractions. But not our little guy! His heart rate increased as he made it very evident on the monitors and his very strong kicks that he did not like the contractions at all and was fighting to stay inside his little home for now. We definitely have fallen more in love with Harrison as we have gained hope from his little fighting spirit and grown more amazed at God's creation of life! This is not what we would have planned, but we feel blessed to have had this time to bond, pray over, and love our son more than we thought we could already.

Well, we were discharged yesterday on strict bed rest and I still feel this little guy protesting contractions and giving his reassuring rolls and tumbles! Yesterday was our four year wedding anniversary! So we were very thankful that because of all this Harrison gave us a night away, granted in a hospital room, and breakfast and bed served on a hospital tray cart by a nice lady in scrubs and a hair net! We will have such fun stories to tell about how Harrison helped celebrate our anniversary. Matt kept telling Harrison we promised to make his birthday special when it was the right time, but that he was not allowed to have his birthday on our anniversary!

I included the picture made lovingly by Harrison's Aunt Anne-Holly. She is so gifted and her talents brought tears to our eyes when we read the words and verse. Thank you Aunt Anne-Holly!