This Is When We Went To The Twilight Tattoo

This was the night I took all four kids onto base at Fort Meyers near Arlington Cemetery. The twilight tattoo celebrates the history of our military and does nothing but instill huge American pride and honor for our country's heroes. 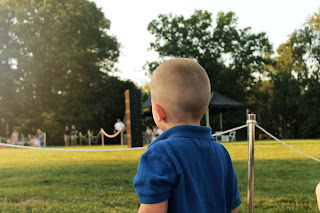 This was right after I had my car searched. The soldiers had been making everyone ahead of us get out, open every door, hood, and tailgate. But blessedly they took one look inside at my full car and only had me get out. And then continuing to be incredible, helped me shut every single thing I had to open while entertaining my wide eyed kids in the back. 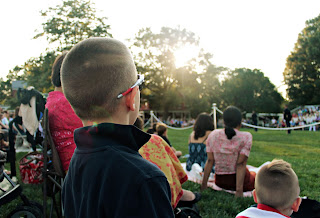 This was right after my heart sank when we walked up and saw a wall of people surrounding the field. I knew if we had to stand in the back, the kids would never see anything and I definitely couldn't hold all four up to watch. But God gave us a awesome gift and a soldier directed us to an open spot right up front! 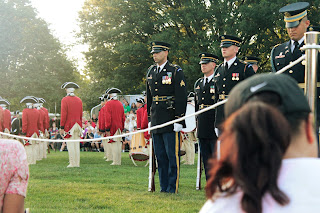 This was was when silence fell on the entire field as the 3rd U.S. Infantry Regiment (The Old Guard) and the U.S. Army Drill Team marched out in perfect unison. And if you can believe it, all four of my kids were participatory in that silence. 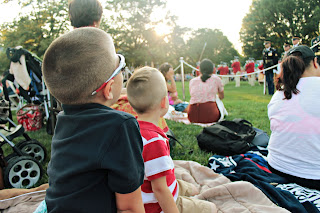 This was when they played the songs representing each branch of the military. The boys totally forgot about the sweltering August humidity and mosquitoes as they watched in awe. 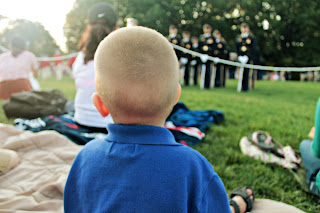 This was right after Wilson decided to pick flowers not only for me, but for every female seated in a ten foot radius around our picnic blanket. 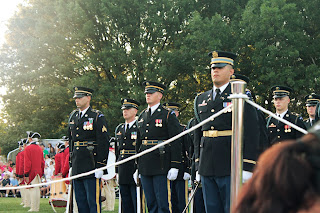 This was right before they took their bayonets and threw them inches from each others heads, spinning them in the air and flipping then behind their backs. 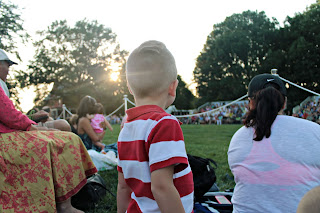 Subsequently it was right before my boys decided they needed bayonets to practice so they could join the drill team one day. 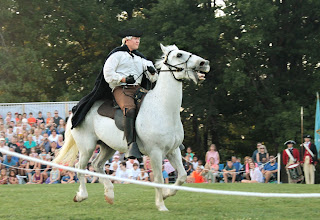 This was when Paul Revere road out across the field warning the "British are coming!" This is also when Harrison loudly asked, "if they could get Paul Revere for the show, why couldn't the get George Washington?" 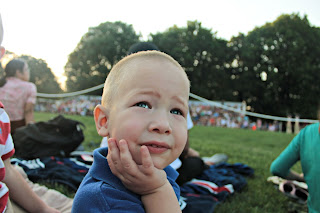 This was Wils being overly cute, right before the soldiers, in mock battle, started firing. 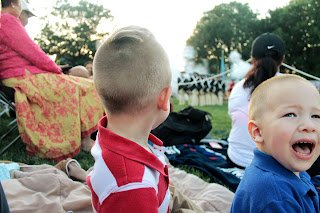 This was Wils deciding he did not like artillery fire; at all. 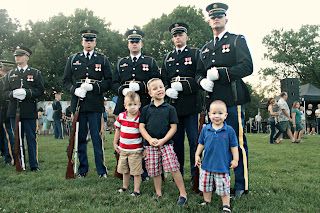 This was when all three boys did a meet and greet with their heroes and informed them they would be relieving them of duty one day. This was before the same drill team members escorted us back to our car parked a good distance away. This was when I wished every American could see and appreciate the incredible military we have and their sacrifice and honor. And this was when I felt proud, as their mom, and as an American.
Labels: Brothers Outdoors Virginia Washington D.C.